Tavannes Watch is the biological father of the Chronomat 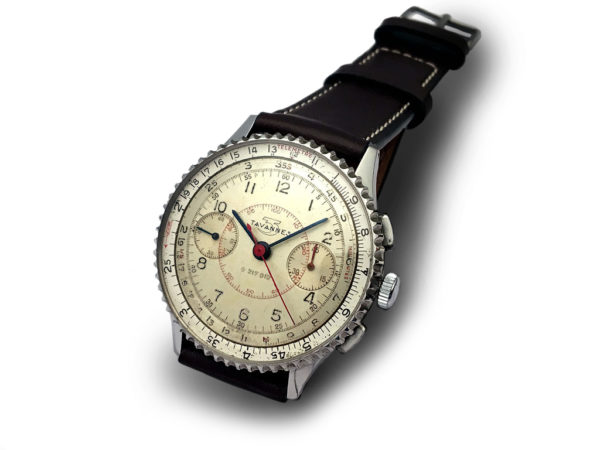 Astonishing! This Tavannes Watch model from 1946, called Chronomat, looks very similar to the Breitling Chronomat reference 769. So suppose the history of legendary Swiss watchmaking calibers was revised a bit?

By Joël A. Grandjean, editor in chief

It is time to give credit where credit is due and to bring out from the databases accessible on the web a patent filed on August 26, 1940 and published 13 months later, on September 30, 1941. It is the CH217012A invented by Adrien Schweizer.

Focus. The caliber of this timepiece by Tavannes Watch is capable of tachometric and telemetric measurements, as indicated on its dial. As the drawing accompanying the patent also reveals. The biological father of the famous Chronomat is therefore to be found in a small village in the Jura region, which gives its name to a brand that was one of the largest watch manufacturers in the world: up to 4,000 movements per day (!), sometimes also sold to other legends, such as Jaeger LeCoultre, Hermès or Cartier. Overall, in the heyday of this industrial flagship, about 2,000 employees were perpetuating the foundation work of Henri-Frédéric Sandoz, a master watchmaker and micromechanical genius who founded Tavannes Watch in 1891 (he was 40). He came from Le Locle, benefiting from an advantage offered by what must have been at the time the equivalent of the ” economical promotion ” of the region: to establish in a village, to stimulate employment and the surrounding development, a company guaranteeing jobs. Other watchmaking names seem to bear witness to this practice, such as Cortébert, Le Landeron, Fontainemelon, etc…

The Tavannes factory – today we would say the Manufacture – was one of the first to join the craze for the wristwatch and therefore to manufacture movements specifically reduced in size while the others were using pocket watch calibers to install them on the wrist.

In addition to this Chronomat, two other pieces have marked the history of this watchmaking legend, now acquired by Florin Niculescu, a former employee of Cyma and Vaucher Manufacture in Fleurier: the very first piece signed by Tavannes, for the US Signal Corps, as well as an emblematic piece personalized for the King of England.